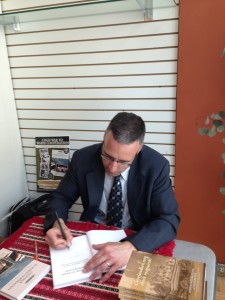 Back-to-back programming drew an enthusiastic audience to the Museum on Saturday afternoon, May 11th. Dr. Endre Szenkirályi led off the program with a fascinating look at Hungarian immigrant life in the Cleveland area from 1951 to the present. Using data from various Hungarian organizations, census numbers, and anecdotal evidence, Dr. Szentkirályi detailed the cultural and social life of the Hungarian American community, touching on issues such as the use of the Hungarian language in the home, participation in Hungarian organizations, and attendance at Hungarian church services. He then touched on how a sense of patriotism among the members of our community affected those who served in the U.S. military. He covered much of his research on the Cleveland area Hungarian Americans who served in the U.S. military from 1951 to the present. His book, Cold War to Warm Cooperation, was available for purchase after the program, and many people stood in line to have him sign books for husbands, brothers, fathers and friends whose stories were shared in the book. A sizable number of veterans named in the book were present at this presentation. Following a short intermission, we were treated to a special fashion show featuring the designs of Tünde Hrivnák. Ms. Hrivnák’s fashions are grounded in folk motifs primarily from the Matyó and Kalocsa regions. In subtle ways, Ms. Hrivnák incorporates these folk elements into her designs of contemporary women’s dresses, shirts, pants and evening attire. Her designs have been designated as part of Hungary’s cultural treasures called Hungarikum. The audience was very receptive to these beautiful fashion items modeled professionally by four young women from Hungary who accompanied Ms. Hrivnak on her tour in the U.S. This last program of the 2014-2015 Lecture Series was partially funded by the Cleveland Hungarian Development Panel. We will start our new series in the fall. A viszontlátásra!

April Book Signing
Breast Cancer: the Good, the Bad, and the Ugly!