By Cleveland Hungarian Museum on April 8, 1999 in Exhibits

Our second “off site” exhibition was at the entrance lobby of the Grasselli Library at John Carroll University, and  was entitled “Moments in Hungarian History.” It included books, maps, paintings,  prints, reproductions, documents, photographs, realia, and narrative texts.  It was partly prepared in conjunction with the 24th Annual International Conference of the AHEA – American Hungarian Educators’Association – held on the campus of John Carroll University April 8-11, 1999.

Please find below some additional information for you about HUNGARIAN HISTORY:

The Hungarian tribes left the area of the Urals. They passed along the Volga and the Caspian Sea. After several hundred years of wandering, they reached the Carpathian Basin.

Under the leadership of Árpád, the Hungarian tribes settled in the Carpathian Basin. They drove out part of the residents and absorbed the other part.

King Stephen of the Árpád dynasty ruled the country.

Stephen was converted to Christianity. After his death, he was canonised.

An abbey was set up at Tihany. The foundation charter was drawn up on the northern shore of Lake Balaton. This is the earliest written record extent in the Hungarian language.

The Mongolian Tatars devastated the country. Their presence, which lasted a year, halted development for at least a century. After the warfare with the Hungarians, the Tatars did not continue towards the west.

At Mohács, the present southern frontier of the country, the Turks defeated the Hungarian army. 150 years of Turkish occupation started.

The Turks occupied Buda. Hungary was split into three parts. The Habsburg governed the western part of the country, the central area was ruled by the Turks, and the south-east Transylvanian principality (today part of Rumania) for a long time was the citadel of Hungarian culture.

Buda was recaptured from the Turks. (The Turks – similarly to the Tartars – could only advance in Europe to the territory of Hungary. Here they were faced by obstacles, after which no strength was left for the siege of Vienna.)

A freedom war under the leadership of Ferenc Rákóczi II, Prince of Transylvania, against the Habsburgs. The rebels defeated the Imperial army in several battles, but did not receive the promised French support and failed.

First half of the 19th century

A national reform movement was launched for the political and economic transformation of the country, for Hungarian language and culture. This was when the National Anthem was born, and the Hungarian Academy of Sciences was set up. The building of the Chain Bridge started. The initiator of these was Count István Széchenyi, an eminent figure of the Reform Age.

A revolution broke out in Pest, which extended over the entire country. The Habsburg Emperor was dethroned after the Hungarian army won several significant battles. Lajos [Louis] Kossuth was elected Governor. The longest European national revolution could only be oppressed in the summer of 1849 by the Habsburgs with the help of the Russian army.

The Hungarians concluded a compromise with the Habsburgs. A double-centered monarchy was set up with seats in Vienna and Pest-Buda. A spectacular industrial upswing started.

Pest, Buda and Obuda were unified: Budapest became a European metropolis. The buildings of that time – the Opera House, the National Gallery and Parliament – still determine the skyline of the city. The first subsurface underground railway on continental Europe was put into operation.

Germany and its allies, including the Austro-Hungarian monarchy, lost the world war. The monarchy disintegrated.

The Trianon Treaty reduced Hungary’s area by two thirds and the population by one third. Since then, considerable Hungarian minorities lived in the neighbouring countries.

Germany concluded treaties in Munich and Vienna, according to which Southern Slovakia and Northern Transylvania were returned to Hungary.

The Nazis occupied Hungary, as they did not consider it a reliable ally. During the Second World War, the Hungarians suffered grave losses on the Soviet front. At the end of the war, Fascists took over the governing of the country.

The Soviet Army entered, then occupied Hungary. At the hastily held elections, the Communists gained only 17 percent of the votes.

A revolution against Stalinism. The uprising was defeated by Soviet troops. János Kádár, who acquired power with their assistance, promised democratic socialism; in the meantime, retaliation and executions started.

The Communist party voluntarily gave up its autocracy. A multi-party parliamentary democracy came into being in the country. The Soviet army left Hungary.

Want to learn more about Hungarian History?  Check out the websites below:

Here is a website that gives a short HISTORY of HUNGARY in “narrative” form:
[This page has additional links for Hungarian History.]

. . . and yet another HUNGARIAN HISTORY Page:

How about a ‘VIRTUAL LIBRARY” for Hungary History?

Do you like MEDIEVAL Hungarian history? Here is a “chat style” web page for you:

How about learning more about the 1848-49 REVOLUTIONS?

Here is the statue of the famous Hungarian patriot LOUIS KOSSUTH, located at the traffic circle in University Circle, at the intersection of Euclid Avenue and Stearns Rd., in CLEVELAND, OH.  It was created in 1901 by sculptor Andreas Toth, and was placed and dedicated as a gift of the Magyar American Citizens of Cleveland: 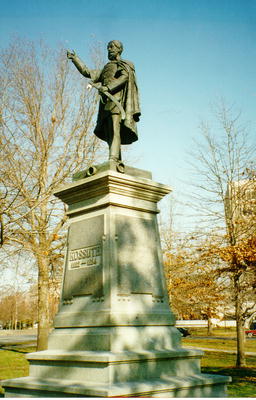 Here is the web site to learn more about the CLEVELAND KOSSUTH STATUE:

. . . and more about LOUIS KOSSUTH in AMERICA: