By Cleveland Hungarian Museum on September 9, 2020 in Exhibits

Hungary has designated 2020 as the Year of National Unity

Hungarians the world over are commemorating the 100th Anniversary of the signing of the Peace Treaty of Trianon on June 4, 1920.

The Cleveland Hungarian Museum’s events to commemorate this historically significant anniversary had to be postponed as a result of the COVID-19 pandemic.

The Trianon Exhibit and Lecture are now being made available virtually online and accessible to anyone, anywhere.

A VIRTUAL EXHIBIT Presented by the Cleveland Hungarian Museum

Can you imagine going to sleep one night at home in your own country and waking up the next morning to find yourself a foreigner in another country which has another language and culture?  The Treaty of Trianon, signed 100 years ago, caused three million ethnic Hungarians to experience just that.
Why was a thousand year history of the Hungarian people not considered in the dismemberment of Hungary by the Allied Powers at Trianon?
How is this Treaty the root of problems that are wreaking havoc in Europe today?
Does history matter?
Understanding the present requires an understanding of the past. The presentation starts at the beginning in 896 with the founding of the Hungarian nation and neatly and in an easy to follow manner condenses a thousand years of history to put into perspective the effect and consequences of the Treaty of Trianon on Hungary, its neighbors, and the ethnic Hungarians who reside there. 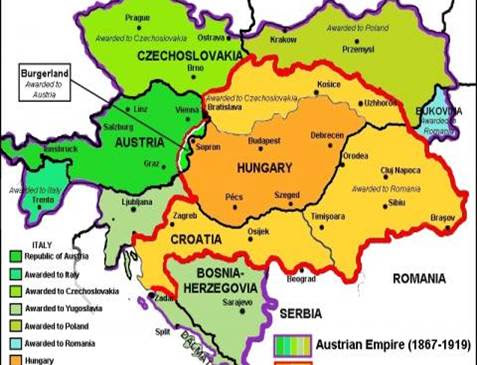 After World War I, the victors convened in Versailles to decide the fate of the vanquished. The Treaty of Trianon, signed on June 4th 1920, dealt specifically with Hungary which, being a part of the Austro-Hungarian Dual Monarchy, was on the losing side.
István Hegedüs will outline the major clauses of this Treaty and provide a historical overview of events that have culminated in a political decision that most Hungarians regard as one of the greatest tragedies inflicted on their country.
He will shed light on why it is still seen as an unjust diktat rather than a fair settlement, one that continues to stir strong feelings that influence Hungary’s politics to this day.

The Museum is proud to share these two resources in furthering an understanding of Hungary’s history and the preservation and continuation of our culture among Hungarians in and outside of Hungary.