The Legend of the White Stag

The story starts thousands of years ago, and has come down to us through the ages as the “Legend of the White Stag”. There once was a prince named Nimród whose people lived on the steppes of central Asia. He had two sons, Hunor and Magyar, both strong and valiant, excellent horsemen and good hunters. Their father was a passionate hunter himself, and he was very proud of his sons who were equally skilled in the art of hunting. 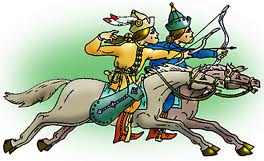 As Nimród watched his two sons grow into manhood, he began to think that they should become independent. He said to them, “I am getting old, and it is time that you began to live on your own. I will give you as many horses and land as you need. Each one of you should take a tent and set it up on land that is filled with game, fresh water, and beautiful vistas. ” The brothers thanked their father and set their tents up on a lovely hill, not far from each other.

One evening as the two brothers sat by the evening camp fire, Hunor spoke up. “Magyar, I was thinking that we should go on a longer hunting trip, leaving our homeland for lands further away with more game and deeper rivers.” Magyar agreed with his older brother, and the next day at dawn, the two set out, along with one hundred of their strongest and bravest men. They rode their horses toward the west in search of new and better hunting opportunities.

As they traveled further away from their home, they came into lands rich in game and rivers filled with fish. This was indeed a wonderful place to hunt and fish! All at once Hunor stopped, and pointed to the trees ahead. “Look Magyar! See that magnificent stag?” Magyar replied, “It truly is magnificent!   A wondrous animal!”

The brothers, along with their men, began to chase the stag, but it was so fast that they were unable to get near it. Soon all the horses began to tire, but the stag kept on running away from them, sometimes hiding in the thicket, and sometimes jumping out in front of them. It was as if the stag was leading the men somewhere.

The longer Hunor and Magyar chased the stag, the further west it flew in front of them. Soon the brothers and their men found themselves in a beautiful land, with tall grasses, fresh rivers teeming with fish, and woods filled with game.

Hunor and Magyar decided to settle down for the night, and to give their horses a rest. As they lit the campfire, the sparks flew up into the starry sky, and the men felt that they had chased the stag into an enchanted land.

The next morning brought them another surprise. They heard singing by the river bank, and as they crept quietly to see who was singing, they spied a group of beautiful girls dancing in a circle. They were like fairies, twirling and leaping in a circle. Hunor and Magyar and their men looked at each other, and without any further discussion, each man rode toward the dancing girls and lifted one up into their saddle. Hunor and Magyar chose the two girls dancing in the center of the circle, the daughters of the local prince, Dul. There was much commotion and confusion as the girls were plucked out of the dancing circle, but in the end, everyone had a partner.

(The translation is loosely based on the Hungarian version found in Magyar Multunk, published in Buenos Aires, 1952.)

The Legend of Emese’s Dream