By Cleveland Hungarian Museum on December 10, 2011 in Events

In addition to holiday customs, traditional holiday crafts, and seasonal cookies, children had the opportunity to learn about some famous and important Hungarians and their contributions: greats such as József Dobos, László Bíró, Ernõ Rubik…lot’s of hands-on activities!

Many children participated in the program, scurrying from one activity to the other…and while they did “Christmasy” types of things, they also learned about some famous Hungarians. Trivia: who was the youngest person to win an Olympic Gold Medal? Who was named FIFA scorer of the century? Who invented the ball point pen? Can you put three colors in a row on a Rubik’s Cube? Our young guests could ,and by the end of the afternoon ,they knew the answers to the questions too. Thanks to Csilla Varga, Erzsi Kováts, Magdi Mészáros, Vali Rátoni-Nagy and her sister Vera, Tini Halácsy and Orsolya Sedenszky who all helped these children learn something about their Hungarian heritage and our culture. Thanks are also in order for Mária Dolesch who faithfully makes the mézeskalács cookies that children love to decorate and then eat! 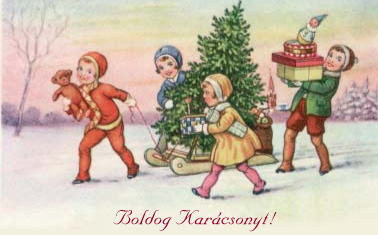 Thanks to Kati Gulden and Klári Thurner for opening the Museum and being behind the counter at the Gift Shoppe. Thanks also to Elmer Mészaros, who fashioned a great soccer game out of one foam board, a plasic cup, some tape and 5 mini soccer balls….children love that sort of stuff!

Finally, thanks to the Hungarian boy and girl scouts of Hungarian Troops 14 and 34, who took the time to share with the children two ancient Hungarian customs – Kántálás, and Betlehemezés…they were wonderful!

And thanks to ALL who helped publicize this event – and especially to Ari and Bandi Lázár for the publicity on the Kapossy Family Radio Hour!

PHOTOS of the Dec. 10 event ARE COMING!