By Cleveland Hungarian Museum on November 3, 2011 in Events 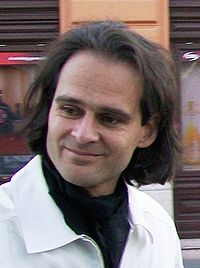 Gergely Bogányi, who hails from a musical family, is one of the youngest ever pianists to have won the Kossuth Prize. He was born in 1974 in Vác, Hungary (his father is Tibor Bogányi), and he was appointed a citizen of honor in his native town ofVác at the age of 22.

He started playing the piano at the age of four. He continued his studies at the Liszt Academy in Budapest, the Sibelius Academy in Helsinki and at Indiana University in Bloomington (USA) with professors László Baranyay, György Sebök, and Matti Raekallio.

He has become one of the leading pianists of his generation. Gergely Bogányi has had success in several national and international competitions. In 1996 he won the International Franz Liszt Competition in Budapest. In 2000 he was awarded the Liszt Prize by the Ministry of Cultural Heritage. In 2000 he was awarded the Cross Merit of the White Rose of Finland by the President of the Finnish Republic. In 2001 his series of “Chopin’s complete piano works” received the Hungarian Gramofon Prize in the category of “Best concert event and performing artist in Hungary.” On March 15, 2004 he received the highest artistic award of Hungary, the Kossuth Prize hu:Kossuth-díj.

Gergely Bogányi has performed worldwide, and performs as a soloist with leading orchestras, for example the London Philharmonic in 2004. On November 27–28, 2010 he performed all the compositions of Frédéric Chopin at Palace of Arts (Mûvészetek Palotája in Hungarian) in Budapest.

See Gergely Bogányi’s website for more information and a sampling of his brilliance at the piano: gergelyboganyi.com