By Cleveland Hungarian Museum on September 17, 2011 in Events

Pál Schmitt, President of the Republic of Hungary (2010-2012), visited Cleveland , Ohio, home of the largest Hungarian community in the U.S., over the weekend of September 17-18, 2011. Among his various appearances, activities, and presentations, President Schmitt and his delegation visited a remarkable number of Cleveland’s Hungarian institutions and met with their leaders. Among his visits, he presided over the oath-taking ceremony for new Hungarian citizens at the Cleveland Hungarian Heritage Museum on the evening of September 17, 2011. 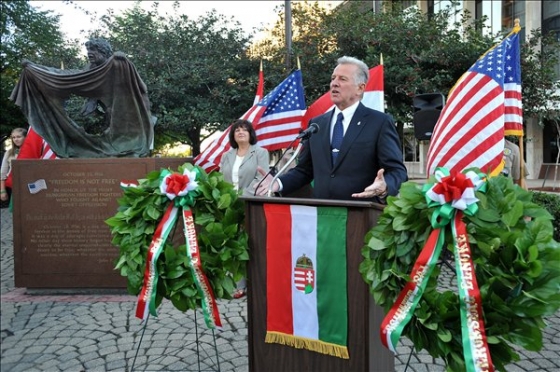 President Pál Schmitt delivering his speech at the statue of the 1956 Hungarian Revolution Source: Office of the President of the Republic of Hungary 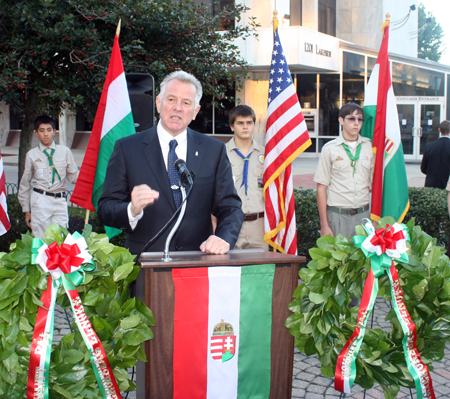 President Schmitt placed a wreath at the statue of Cardinal Mindszenty and the Freedom Fighter statue. Source: www.clevelandpeople.com

The Cleveland Hungarian Heritage Museum, a 25 year-old institution, is considered “the heartbeat of Hungarian Culture” in Cleveland. There, amid the display of Hungarian costumes and cultural treasures, thirteen people took the oath of Hungarian citizenship in a moving ceremony administered by the Hungarian Consul from New York. In his remarks, President Schmitt mentioned that since the Parliament approved the simplified naturalization process, each week 5,000 Hungarians living outside Hungary’s borders have applied to become citizens of Hungary. Before retiring for the night, the President examined the Museum exhibits, and joined the guests for a festive champagne reception.
In his remarks the President said: “We feel responsibility for the fate of Hungarians living outside of our borders and we intend to promote and foster their connection with HU by preserving their Hungarian identity. Our history, our culture, our traditions and our unique language have always worked together to create an inseparable bond. Now (the new citizenship law) will make it possible for every Hungarian living outside our borders to obtain citizenship, to connect and to share this inseparable spiritual bond. In our heart, we have always been one people, one nation.”

Several Hungarian American Coalition leaders took an active role both in encouraging President Schmitt to target Cleveland as the location of his first U.S. as President, and in organizing the actual visit. Coalition Chair Emerita Edith Lauer, with Honorary Consul László Böjtös, led an ad hoc committee which included Ted Horvath to plan details of the visit. Mr. Böjtös greeted the President with brief speeches that provided an excellent overview of Hungarian American attitudes toward Hungary. Ms. Lauer moderated the luncheon program, where two Coalition Board Members, Gabriella Nádas and Sándor Krémer, and a long-time supporter, Dr. Jeanette G. Brown were the honorees.

The Northeast Ohio Hungarian community is still the largest in the U.S. with approximately 100,000 residents claiming Hungarian heritage. The churches, the Hungarian Scout movement, the Hungarian Heritage Museum and other institutions remain active in their commitment to maintain their Hungarian culture and identity.