By Cleveland Hungarian Museum on August 18, 2007 in Events 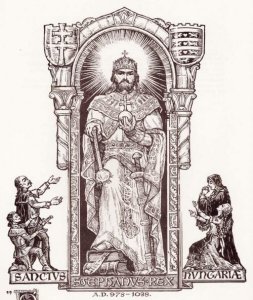 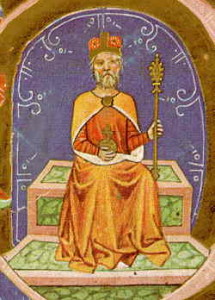 St. Stephen, or in Hungarian “Szent István,” the first Christian King of Hungary, was born in 975 AD and died on August 15, 1038. He was a son of the Hungarian chief Géza and was baptized, together with his father, by Archbishop St. Adalbert of Prague in 985. On this occasion, he changed his pagan name of Vajk to István / Stephen.

St. Stephen’s feast is officially on September 2, but in Hungary his chief festival is observed on August 20, the day on which his relics were transferred to Buda. Thus, August 20 is celebrated as “St. Stephen’s Day – Szent István Nap” – in Hungary, where it is a national and public holiday. In Budapest, the day ends with fireworks over the Danube, much as the 4th of July might be celebrated in the USA, or July 14 – Bastille Day in France.

In 995 A.D., Stephen had married Gisela, a sister of Duke Henry of Bavaria, the future Emperor St. Henry II, and in 997 succeeded to the throne of Hungary. In order to make Hungary a Christian nation and to establish himself more firmly as ruler, he sent Abbot Astricus to Rome to petition Pope Sylvester II for the royal dignity and the power to establish episcopal sees. The pope acceded to his wishes and, in addition, presented him with a royal crown with which he was crowned on August 17, 1001. 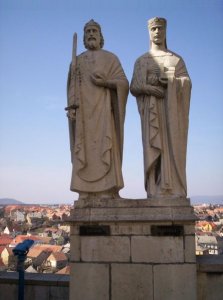 On 2 September, 1031, his only son, St. Emeric [Szent Imre], lost his life on a boar hunt. Thus, Stephen’s cherished hope of transferring the reins of government into the hands of a pious Christian prince were shattered. During his lifetime a quarrel arose among his various nephews concerning the right of succession, and some of them even took part in a conspiracy against his life. He was buried beside his son and both were canonized together in 1083. 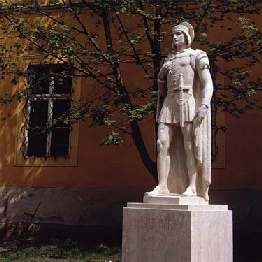 In Székesfehérvár, in the northeast corner of the “Old Town,” a narrow building houses the extensive collections of the István Király Museum with numerous exhibits on the history and culture of the town and region. The Roman finds are particularly interesting, together with those from the Magyar empire and stonemasonry from the Royal Basilica.

The Holy Crown of St. Stephen and other Cornation Jewels are considered national relics in Hungary. They have a long history [see internet links below], and are currently on display in the Parliament of Hungary, in Budapest.

István – Stephen is a very popular male name in Hungary, and the nickname can be Pista, Pisti, Isti. There are many churches dedicated to St. Stephen in Hungary and in communities settled by Hungarians abroad. His name and his story have always been deeply revered. Stephen was even the subject of a famous rock opera which debuted at the National Theatre in Budapest in 1985: István, a Király – Stephen, the King, by Levente Szörényi and János Bródy, based on the drama entitled „Ezredforduló” by Miklós Boldizsár. The rock opera had been previously released as a feature film in 1984. The work has now become a classic and is available in book format, and also on film, video, DVD, record or CD formats. It is still performed as a musical play in regular as well as open air theatres, by both amateur and professional groups in Budapest as well as in other Hungarian towns and cities, and in Hungarian communities abroad. Szörényi’s Veled, Uram! (With You, Lord! – 2000) was a sequel to István, a király.

Read more about St. Stephen and Hungary, in English

See our “Past Exhibition” website on the Herend Coronation Crown replica.  The Museum has on display a replica of the Holy Crown of Hungary, manufacatured at the Herend Porcelain facory in Herend, Hungary – see photos on website.

Watch film clips & hear the music of the 1983-84 rock opera film version of István, a király, on U-Tube:
(w/ links, see most of film, but no English subtitles; links include all lyrics – magyar only)
(Note: Some clips are from feature film, others from live performances.)