By Cleveland Hungarian Museum on November 19, 2007 in Events 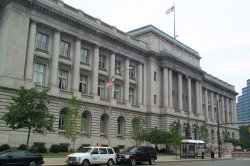 The Cleveland Hungarian Heritage Museum joined 5 other nationalities with an exhibit at Cleveland City Hall throughout November. 2007.
Address: 601 Lakeside Ave. in downtown Cleveland.

November was Eastern European Cultures month in the City of Cleveland. We were one of six nationalities participating. Each nationality was given the opportunity to organize an hour long program. The Hungarian program featured dancers from the Hungarian Scout Folk Ensemble, a DVD on Hungary sent to us by the Hungarian Embassy in Washington, and a presentation on the Hungarian immigrant commnunity in Cleveland. This program was free and open to the public and sought to educate the audience on various aspects of Hungarian culture, history and Hungarian life in the greater Cleveland community.