By Andy Meszaros on February 12, 2015 in Children’s Corner

The story of how the ancient Magyars came to settle in the Carpathian Basin begins with Árpád, the most famous of all the ancient Magyar Chiefs. Árpád’s story is exciting and gives us a glimpse into the customs and lives of the Magyar people in the 9th century.

The story begins during peacetime…..Lehel, one of the respected warrior chiefs, was sitting outside his yurt at the campsite of the ancient Magyars. He was carving the horn of an ox, when Szabolcs, a warrior companion came up to him. “How beautiful your carved oxen horn is, it will make a good horn in battle! We will be ready soon to enter into our new homeland, a place that was Attila’s country, and the place our people are destined to occupy. Look at those beautiful mountains!” The two men looked west at the mountains looming in the far horizon, then looked to the east toward their ancient home on the steppes of Asia, and sighed. The time to move on was nearing. The weapons had been repaired, the troops rested. The peaceful calm would soon be replaced by preparations for the great journey ahead for the Magyars.

All at once a young soldier appeared in front of them and announced that the elderly Chief, Álmos, was calling all his warriors and tribal chiefs together. When the leaders of the tribes were finally assembled, they counted all the heads of the families within their tribe, and once they were sure everyone was present, an expectant silence fell over the gathering. Suddenly, the ceremonial leader struck his shield with his sword. Slowly, the aged Álmos walked toward the center of the gathering. Behind him walked his son, Árpád, whose strong features and noble demeanor commanded everyone’s respect. Álmos turned and addressed the gathered leaders in his strong and deep voice:

“Dear leaders of my people! The Turul bird* showed my mother Emese, where our people were destined to find a homeland in which we could settle and raise a nation such as no one has ever seen. The Turul has accompanied us on our journey, guided us in our battles, and led us as we have moved toward our new homeland. In the meantime I have grown old, my hair has turned white. I will be with the god of warriors soon. We have rested, and have prepared well for the upcoming battles we will face. But our people need a new chief for this conquest and the establishment of a new homeland.”

As he spoke, the crowd listened. ” I would like to recommend to you my son Árpád, as your new chief. It is your choice.” The crowd shouted their approval in unison, and as was the custom of the ancient Magyars, they raised Árpád up onto the shield of the ceremonial leader, and placed his sword in his hand, proclaiming him to be their chief and leader of all the Magyar tribes. 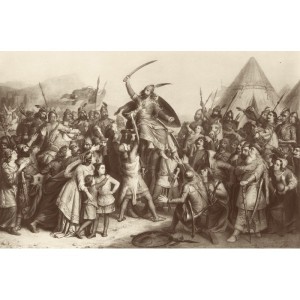 Álmos then lifted his own heavy sword for the last time, turned toward the Carpathian Mountains, and said, “This is the way to the new homeland!”  Then he handed his sword to Árpád, who assumed the leadership of his people with these words, ” My wise father, as you have commanded, I will do your will.” Álmos then lifted his hands over Árpád’s head in a blessing, and as he finished blessing his son, he swayed, and fell to the ground. His death was mourned by all the Magyars, who had lost a beloved and wise leader.

*The Turul bird is an ancient mythical bird of prey symbolizing the Magyar (Hungarian) nation.

(The translation is loosely based on the Hungarian version found in Magyar Multunk, published in Buenos Aires, 1952.)

One Response to Árpád is elected Chief