By Marcia Mestrits on March 6, 2015 in Programs 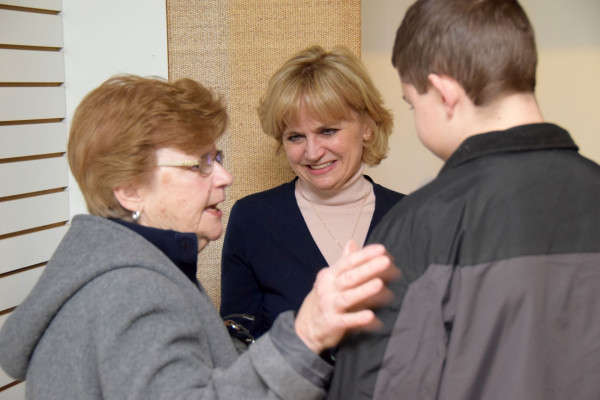 Our February 14th presentation was held on schedule despite the raging snowstorm outside. Considering all of this, our attendance was still over 30. Once warmly ensconced, the audience was introduced to our guest speaker, Susan Papp Aykler, by Edith Lauer, the head of the Lecture Series. It was a pleasure to welcome our presenter as a former member of the Cleveland Hungarian community. Mrs. Akyler spoke chiefly about the program named Students Without Borders. It is a program run through the Rakoczi Foundation, of which she is president.
The aim of this program is to reach out to students between the ages of 13 – 17 who live as Hungarian minorities in the Ukraine, Slovakia, Romania, and Serbia. It is a 12 day program which takes place in Hungary. Among its goals is to widen the horizons of the participants. Another is to demonstrate to the youth that they are worthwhile individuals who have a positive role in the European Union. The countries that they come from have had many difficulties arising out of misconceptions and misunderstandings. The program accentuates tolerance of others, acceptance of democracy, and the relinquishment of negativism. The students are taught that their self-identity is as important as their identity as a Hungarian minority.
This program is 23 years old and is financially supported by donations from around the world. It focuses on similarities rather than differences. As such, Students Without Borders was awarded the first Charlemagne Youth Prize by the Parliament of the European Union in 2008.
The Lecture Series is being partially funded by a grant from the Cleveland Hungarian Development Panel.

Education in Hungary after 1989
Round table discussion on March 14th