By Andy Meszaros on March 16, 2015 in Programs
It was a wonderful feeling to have our audience finally sitting in our new “home”, and the men on our Board had to keep bringing in chairs from the Galleria to accommodate the nice turnout for this, our 4th program in our lecture series. And it was truly inspiring to have two young presenters for this program.
Mireille Thomas Winings spoke of her impressions of the entrepreneurial spirit in Budapest, which she visited last spring with her  MBA class at CWRU’s Weatherhead School of Management. In her presentation, she described the programs organized for them in Budapest. Highlights included a visit, among others, to the headquarters of Prezi, one of the most successful new businesses in Hungary, as well as spending time at General Electric learning about some of the innovative research going on in the world of lighting.  Members of the audience asked Mireille’s to describe in more detail some of the companies her class visited. 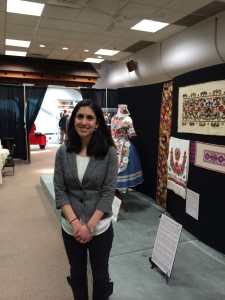 Miklós Boros followed with a presentation summarizing his experiences as a participant in last summer’s ReConnect Hungary Birthright program. He talked of the history of the program, its goals and his own impressions of  many facets of the cultural, social and political life that he witnessed while in Hungary. These young people also had a chance to visit a city in Vojvodina (Délvidék), because the program directors make it a point to have their groups visit Hungarian communities outside the borders of present-day Hungary. A nice feature of the program is that one does not have to speak the language in order to participate in the program, although Miklós himself does speak Hungarian. ReConnect Hungary is open to young people between the ages of 18-26 of Hungarian heritage who have a keen desire to “reconnect” with that heritage. Questions from the audience centered on how one could qualify to participate in this program.

Fr. Tamás Forrai is the Provincial of the Hungarian Jesuit Community. He gave his presentation in Hungarian, although an outline of his talk in English was passed out to everyone. Fr. Forrai has extensive experience in the field of education in Hungary, having been the principal and later the president of the Fényi Gyula Gimnázium in Miskolc, Hungary. He spoke on the educational system in Hungary since the fall of Communism in 1989, and specifically mentioned the various reforms that were implemented recently. The centralization of the curriculum, the mandatory preschool age set at 3, and the increase in the number of religious schools were all topics touched on by Fr. Forrai. He answered questions from the audience both in English and Hungarian. 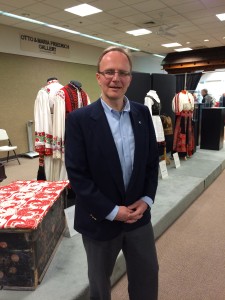 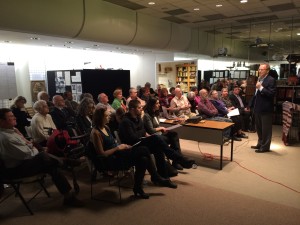 You can tell that a program is compelling to the audience when people have questions and the speakers and audience interact. This interaction continued around the coffee and pastry table after the round table presentations. As always, our visitors had a chance to browse in our new Gift Shop, and take in some of the exhibits that are already up for viewing. We look forward to officially welcoming everyone to our new home on Saturday, April 11th, at 3 o’clock! A viszontlátásra!