In keeping with the general theme for this year’s Lecture Series, The 25th Anniversary of the Fall of Communism, our theme for today’s presentation was “Education after 1989 in Hungary”. The two presenters, 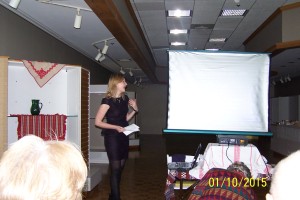 Dr. Rita Gárdosi and Piroska Táborosi, gave information on elementary as well as higher education. Dr. Gárdosi’s presentation started with a brief overview of the political climate between 1949 and 1990 and its effect on education. It accentuated the use of the Pioneer movement in Hungary to “indoctrinate” the youth. After the regime change, the 1993 Act of Education altered several previous premises such as the compulsory age from 16 to 18, introduction of wide range of foreign languages, and the right proportion between arts and sciences. Dr. Gárdosi also presented on today’s educational system in Hungary with special emphasis on foreign language issues. It was also interesting to hear about pedagogical concepts developed by Hungarians. To view the entire text of the presentation, please click here.

Mrs. Táborosi’s presentation was based on a visit to an experiential, teacher preparation school and a dual-language Catholic school from the viewpoint of an American educator. The teacher preparation school, the ELTE, is considered among top five schools in the country in terms of student assessment scores. The master teacher in the ELTE program “spends” the 32 hours in the building in the company of the students, but only teaches 12 hours in the school. The dual-language school, Szent Benedek Iskola, is a school whose struggles, growth and development serve as a consistent example of what many religion-affiliated schools have had to contend with over the course of the past 25 years. Most importantly, the existence and health of the religious school implies a healthy society and a political system which is tolerant of varying beliefs. To view the entire text of the presentation, please click here.