By Andy Meszaros on June 4, 2018 in Announcements 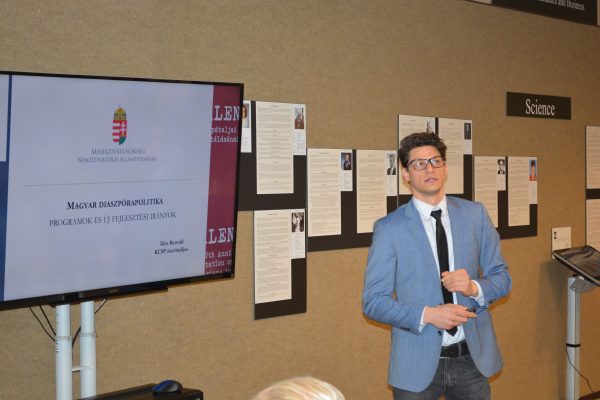 For nine months, Bertold Illés came to our Museum four days a week to work on various projects that benefited our organization. In addition, as a Kőrösi Csoma intern, Bertold worked with other Hungarian organizations in the Cleveland area, thereby fulfilling the mission and goal of the Kőrösi Csoma Sándor Program (KCSP), a project directed and funded by the Hungarian government with the goal of helping Hungarians maintain and nurture their Hungarian identity throughout the Diaspora. On May 22nd, with many of his new friends and acquaintances in attendance, Bertold gave a Hungarian language presentation which included a summary of the KCSP program; he then went on to share his personal experiences working within the Hungarian community here in Northeast, Ohio. He then focused the rest of his presentation on the research he conducted with reference to a hand-written memoir found in the Museum’s archives.

This hidden primary source material was highlighted in Bertold’s talk, and gave the audience an intimate and very moving portrayal of the plight of Hungarian soldiers who were captured by the invading Soviet army, and the unspeakable horrors that these men endured at the hands of their captors. As POWs they were treated to such inhuman conditions, that the audience was moved to hear the words that were recorded in this hand-written memoir. The memoir was the painstaking work of Károly Hokky, who after leaving his homeland, later came to live in Cleveland, Ohio. Bertold was able to enhance his presentation with movie clips and documentary excerpts, all of them very compelling. The Museum is very grateful that this important glimpse into Hungary’s history was shared with its members and supporters through the work of Bertold Illés. The links below give you the chance to experience a bit of what we experienced that memorable evening, including excerpts from the transcribed Hokky memoirs. We extend our sincere thanks to Bertold Illés, and wish him the very best in his future endeavors!

Dr. Csaba Latorcai’s visit to our Museum
What has been going on at the Museum?