By Andy Meszaros on March 30, 2022 in Announcements

There is nothing lovelier than a basket filled with beautifully decorated Easter Eggs. The colors and the designs make you want to decorate eggs like that. Well, you can do just that! Just read on. 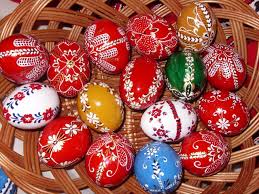 Many cultures celebrate Easter, and part of their heritage includes the art of egg decorating. Hungary is no exception to this custom, and many Hungarian Americans have preserved this ancient custom and bring it to life in their homes each spring.  Years ago the Cleveland Hungarian Heritage Museum hosted a hands-on program dedicated to teaching egg decorating techniques Hungarian style. Magda Temesváry began the  program by telling the audience of adults and children that the decorating of eggs goes back many centuries to the times when the Magyar people had not yet  converted to Christianity.  Remains of decorated egg shells have been found in ancient Magyar graves.

The decorated eggs of the ancient Magyars served almost the same purpose as modern day greeting cards: they had a message scratched on them that you could “read” if you knew what the various symbols meant. When someone received an egg, it may have wished them a long life, or health, or many children. The color and the designs all meant something to the ancient Magyars, and these designs were handed down over many generations, taking on Christian meanings as the people began to decorate eggs as part of their Easter tradition.

The humble egg itself had special meaning, because from the egg came new life. As the chick broke out of the egg, new life was born. This became the primary symbol of Easter. Over the many hundreds of years, certain motifs (designs) became common to Hungarian Easter eggs. These motifs recur in ancient egg decorations too, such as half circles, symbolizing resurrection; or intertwined loops, symbolizing love making and eternal life; or the presence of dividing lines encircling the egg, symbolizing the separation of life on earth and the afterlife. 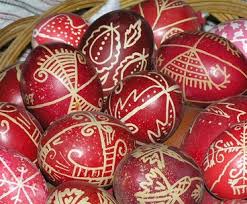 Slowly other ancient designs and symbols took on  more contemporary, western elements. For instance, the sun became a flower and leaves began to denote the constant movement of nature. Only one motif used in pagan times remained the same in Christian times and that was a rake-like motif that symbolizes fertility.

The sun became a flower

Hungarian decorated eggs were originally almost always red eggs (piros tojás) because red symbolizes renewal and the sprouting of new life. Just as your blood is red and is necessary to your life, so too the red egg symbolizes life.

The techniques used to decorate eggs evolved over centuries. We think that the very early egg designs were scratched onto colorful eggs found in nature, like a robin’s egg that you can find in your backyard. Later natural dyes were used, such as onion peels or  berries, and the designs were scratched on the eggs once they were dyed. Today chemical dyes are also used.  Later, the art of using wax on the egg, similar to the way you would create batik fabrics, became a popular way to decorate eggs. Today, it is one of the most common ways of decorating eggs. In addition, people have glued designs onto eggs, they have painted designs on eggs, even nailed copper and sheets of gold or thin metal strips onto eggs. Hungarian egg decorating is a very creative art form!

You will also find that in addition to the ancient designs on the traditional red eggs, Hungarians use many floral motifs  from the various folk regions found in Hungary. This trend developed as the folk art in the villages developed. Since much of Hungarian folk design has floral elements,  the same motifs were transferred onto the eggs. That’s why you can see eggs with many designs in Hungary today. 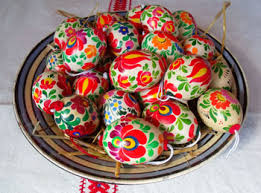 In many regions of Hungary, eggs are given as gifts by both men and women, as signs of affection.  But the most famous and beloved custom of egg gifting comes from the celebration of life and spring on Easter Monday, called Húsvéti Locsolás (Easter sprinkling or plunging). Throughout the villages of Hungary, the young men dumped bucketfuls of water on the young girls, symbolizing the hope of spring, the watering of flowers and the rebirth of  nature. The girls decorated their eggs during the days before Easter, and then gave them to the young men after they had been “sprinkled” or “watered”. In the cities, the custom was modified, as young men went to the homes of young girls they knew and sprinkled them with cologne. The custom of “thanking ” the young men for the sprinkling was the same- the girls gave the young man a decorated egg. This custom of sprinkling on Easter Monday continues today throughout Hungary, and even in Cleveland, Ohio! 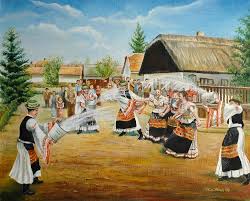 Easter Monday sprinkling in a village. This custom is still observed in many places in Hungary today.

For our families and young readers- you too can join in the fun! Take the time this year to decorate Easter eggs using some of the ancient Hungarian designs, or some of the newer flower motifs found on embroidery from different regions of Hungary. If you don’t want to use a real egg, try decorating paper maché eggs that you can find in craft stores. You can use felt tip pens or tempera paint or another type of craft paint to decorate real and paper maché eggs. If you use a real egg, you can either blow out the yolk from the egg by punching a tiny hole on both ends of the egg and blowing the yolk out, or you can hard boil the egg, and after it has cooled down, you can decorate it. If you have a wax applicator, or stylus, you first apply the wax to the egg and draw the designs on the egg, and then you place the egg into the color dye. Once the dye is dark enough, take the egg out and let it dry, and then if you want, you can carefully scratch the wax off using an exacto-knife or you can melt the wax with the flame of a candle and carefully wipe it off with tissue paper. You can also dye the egg one color, and using an exacto-knife, you can scratch or etch out the design. To give the finished and dry egg a nice shine, you can take some butter or lard and apply it to the egg and then wipe the egg. Practice first on paper maché eggs, and you will see that you will become an expert egg decorator in no time! If using one of the ancient designs, be sure to divide your egg into sections (see second paragraph above) to make it look authentic.

To add to the fun, the boys can take water in a bottle or some spray cologne, and when the girls aren’t looking, they can surprise them by sprinkling them! But be ready girls! have your eggs close by to hand out. This ancient custom can become an Easter tradition in your home too! 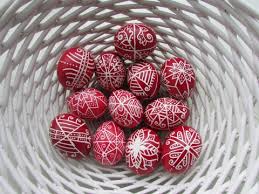 Some red eggs with the more traditional, ancient designs.

Material for this article was taken in part from Hímestojás, The Art and History of Hungarian Decorated Eggs, by Emese Kerkay, Clark Printing, Garfield, New Jersey, 1995.